The humpback whale is a baleen whale with the average adult ranging from 38 to 52 feet in length and weighing up to a whopping 56 tons. Made famous by its acrobatic breaching style, lengthy fins, and lumpy head, they are also known for composing complex underwater songs. These unique qualities make this species very popular among the world’s whale watching community as they guarantee a topnotch show! 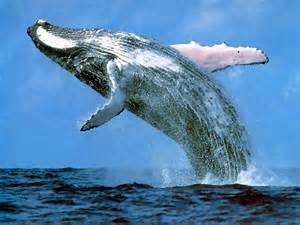 Aside from the theatrics these animals have an impressive migratory pattern and interesting seasonal feeding habits.

Humpbacks travel up to 16,000 miles in a year between feeding and breeding grounds. They feed only during the summer months by patrolling the oceans polar waters and gorging themselves on krill and various other schooling fish. They employ many different tactics to ensnare food as the must continually work to build up the fat stores they will depend on to survive the winter.

The humpback is an energetic hunter. Single whales usually hunt by direct attack or by stunning there pray with blows from there massive fins and fluke.  This species does not always hunt alone. They have been known to formulate hunting parties where they employ a very inventive technique called bubble-net feeding.

Bubble-netting is the result of numerous whales swimming in circles blowing bubbles below a school of fish. With each revolution the whales will circle tighter using their fence of air to force the school of prey to condense, so that another whale can swim up from below, mouth agape, and swallow thousands of fish in one gulp!

As the seasons shift from summer to winter they begin their migration back up toward the equator. This is the time utilized for courtship and mating. Competition for females is fierce among unrelated males as the females only breed every two to three years. 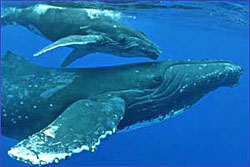 A single calf is typically born after an 11.5 month gestation period. Newborns are 20 feet in length and weigh 2 tons. During the first six months that calf will nurse exclusively on milk that is 60% fat and pink in color.

A calf needs to consume 200+ liters in a day in order to put on the weight necessary to survive the migration back to the arctic. It will then transition into a mix of independents feeding and nursing for the next six months. At the one year mark the calf is considered a juvenile and it will part from its mother and head off to make a life of its own.