The waters surrounding the earth’s southern most pole hover just above the freezing point (-2 degrees Celsius). As one of the most extreme environments on earth not many animals call this icy sea home, but there is a species of fish called Antarctic notothenioids that make your polar plunge look like amateur hour.

Most fish fluids (blood and body fluid) freeze at -1 degrees Celsius so in order to survive the positively sub-zero temperatures of the Antarctic sea the Notothenioids had to evolve some very peculiar adaptation to avoid literally freezing from the inside out!

Fish feed on microscopic phytoplankton found floating in the ocean, in polar regions this means they also inadvertently ingesting small ice particles. Ice crystals grow, even inside the fished body, so for a normal fish this would be a death sentence. However Notothenioids produce a type of internal antifreeze that binds to the ingested ice crystals and prevents them from growing. 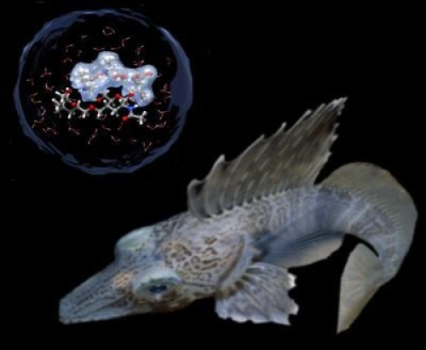 The antifreeze glycoprotein allows these fish to dominate the oxygen rich Antarctic waters. Due to the cold this region lacks the biodiversity of more temperate regions, though it hasn’t always been that way. Historically the area we know today at the Antarctic was warmer and supported a more diverse array of life, but around 5-15 million years ago this shifted and as the region cooled allowing one ancestral Notothenioids evolved into the 120+ species we recognize today.