Maybe you have been lucky enough to experience a sea turtle laying her eggs at night. But have you seen thousands of them nesting at the same time? Imagine walking along the beach at dawn. A faint outline of a sea turtle comes into view. And another! Now you are surrounded by hundreds of mama sea turtles dragging themselves onto the beach to lay their eggs.  What’s happening?! 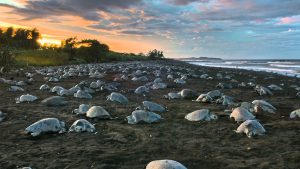 What – You have now witnessed an arribada- the Spanish word for arrival, or arrival by sea. This is a mass nesting by hundreds, even thousands of sea turtles, coming onto shore in unison. Each sea turtle lays around 80-100 eggs in a clutch. You do the math!

Who – Arribadas don’t occur for every type of sea turtle – it is unique to Olive ridleys and the smallest sea turtle in the world, the Kemp’s ridley.

When – The largest arribadas usually happen from August to December in Costa Rica. Did you know it depends on the moon cycle? Ten days before the new moon, hundreds of sea turtles gather off the coast. After a few days and a secret signal,  they make their way up on the beach en masse.

Where – Kemp’s ridley sea turtles usually nest along the gulf of Mexico. On a single day in Rancho Nuevo, scientists found about 40,000 Kemp’s ridleys nesting! You can witness Olive ridleys nesting along the Pacific coast of Costa Rica, specifically on a small providence called Ostional. Because they nest year round here, it is a great ecotourism destination for Costa Rica and gains international recognition. 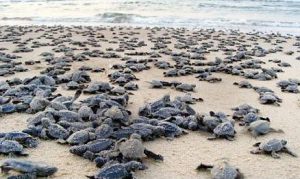 Why – Good question! Arribadas are not well understood, but it is thought that it has to do with moon cycles and weather patterns. We think they have these mass nestings in order to increase the chance of survival. The thought is that they deposit more eggs in the sand than predators are able to consume.

Whoa – The largest arribada in Costa Rica accounted for over 500,000 sea turtles coming to shore laying millions of eggs in November of 1995!