Happy Holidays from Under The Sea! 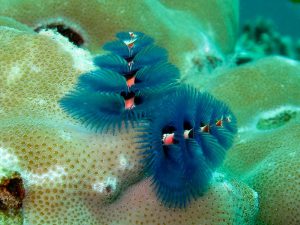 The holiday season is here again! Your decorations are out, the tree is up, and maybe you’re hoping for some snow to fall. Since snowy white Christmases are fairly rare here in Wilmington, North Carolina, we find ourselves looking to the ocean to get some holiday inspiration!

Christmas tree worms – You may not be able to decorate this type of Christmas tree, but they do come in a variety of bright colors that are very pretty! Each worm has two brightly colored crowns that stick off of its tube-like body. The tree-like crowns are used to filter feed the passing plankton. These worms are sedentary, meaning that once they find a place they like, they don’t move much, kind of like some of our pesky relatives on the couch! 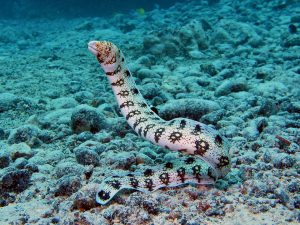 Snowflake moray – Snowflake eels are not so great for snowman building but they are fantastic nocturnal ambush predators, striking at unknowing fish and crustaceans who wander by. Found in waters up to 35 feet deep, these eels are native to the caves and crevices of Indo-pacific reefs. They are a bit shorter than most eels only growing to 3 feet in length. Their unique pattern makes them easy to distinguish from most other eel species. 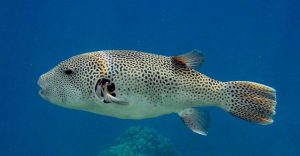 Starry Puffer – Unfortunately its bright orange and dark black body won’t really make a great topper for your tree, but this puffer grows to be one of the largest in the world. In the wild this fish can reach 4 feet in size and when feeling threatened or alarmed can inflate its body to almost twice the size!

Saltwater Peppermint shrimp – This shrimp probably doesn’t taste like candy but does have beautiful coloration with its red and white stripes. These small shrimp are considered part of the “cleaner” group of shrimp as they scavenge and consume uneaten food. There’s always one person in the family that’s labeled as the “cleaner.” 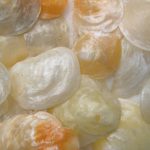 Jingle shells – Jingle shells are bivalves similar to mussels, oysters, and scallops, meaning they have two distinct shells. Their shells are extremely thin, translucent, and almost paper-like. They are named for the sound that is made when several shells are strung together as a chime. 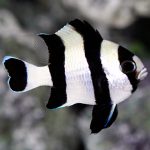 Humbug damselfish – The Humbug damselfish gets its name because they are very territorial, especially as they get older, similar to our friend Ebenezer Scrooge. Corals play a key role in providing shelter and safety for these fish; when in danger the entire group hides among the coral branches.

Pinecone Fish – Pinecone fish looks like the real thing on land – no glue and glitter needed here! They have a brilliant yellow body that is covered in spines. It has what appears to be a glowing smile because of the light-producing organs on each side of their head.

Cookie cutter shark – I don’t think you want any cookies made from this guy! The name “cookiecutter shark” refers to its feeding habit of gouging round plugs, as if cut out with a cookie cutter, out of larger animals. Marks made by cookiecutter sharks have been found on a wide variety of marine mammals and fishes, as well as on submarines, undersea cables, and even human bodies. 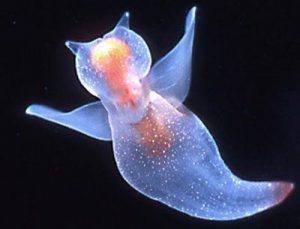 Sea angels – Sea angles are tree toppers unlike any other! Reminiscent of a freshly made snow angel, these animals are actually shell-less sea snails. They flap their adapted foot ‘wings’ to get around in the water column. They are extremely small, with the largest species reaching only 5 centimeters long.