The Hawaiian Green Sea Turtle is still one of the state’s most treasured creatures, and we are fortunate enough to work with them in our teen Hawaii Sea Turtle Camp program.  Below, are five things you should know about these awesome animals before your next trip to Hawaii. 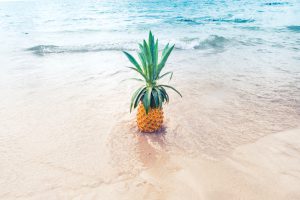 Native Hawaiians Greatly Valued Turtles: Some Hawaiians traced their spirit animal or amakua, back to the turtle and early drawings from ancient Hawaiians depict numerous etchings of sea turtles, proving just how important they were to the culture. Sea Turtle meat was considered a delicacy and it’s been thought that harvesting them was restricted and fell under the control of the chiefs.
They Are Making Comeback In Hawaii: The population of Green Sea Turtles are declining all over the world, but in Hawaii, they’ve actually seen a growth in numbers. Most of the comback in Hawaii has been because of their protection under the Endangered Species Act. Over the last 30 years, the number of Green Sea Turtles or honu, in Hawaii has increased by more than 50 percent.
They Live a Long Time: Many green sea turtles can live to be 70 years old and tip the scales at nearly 300 lbs. While much of their diet is vegetarian, they’ve also been known to scarf down jellyfish, mollusk, or sponge as well. Most adult turtles primarily eat algae and rely on a special micro flora that enables them to constantly break down such dense roughage.
Looking Is Fun But Don’t You Dare Touch: Because They are endangered species, it’s illegal to get too close to these incredible turtles, who often lounge lazily on the shoreline. If you are lucky enough to see one in the water or on the beach, please keep your distance and enjoy the fact that they are even letting you in their presents.
They Can Be Found Word-Wide: In Hawaii, which we mentioned is home to one of the strongest populations, the Green Sea Turtles primarily nest and lay their eggs in the Northwest Hawaiian Islands and the French Frigate Shoals. They call both tropical and sub-tropical climates home and Green Sea Turtles can be found in many locations throughout the world. 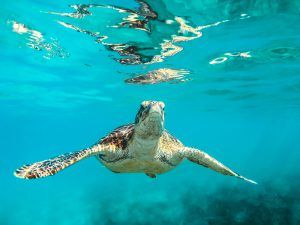 If you’re really interested in Hawaiian Green Sea Turtles, join us on our life-changing and enriching our Hawiian Sea Turtle Adventure.  https://www.seaturtlecamp.com/hawaii/. .