As the name suggests, longline fisheries trail a long line, or main line, behind a boat. Longlines are used for the capture of pelagic (open ocean) species of fish such as tuna and swordfish. Longline fishing utilizes fishing lines that can be as much as 62 miles long. The line itself is buoyed by Styrofoam or plastic floats. Usually, at about every 100 ft, a secondary line is attached and hangs down from the mainline. The lines are baited with mackerel, squid, or shark meat and have as many as 10,000 hooks. Every 12-24 hours, the line is hauled in, mechanically re-baited, and set back into the water behind the vessel. 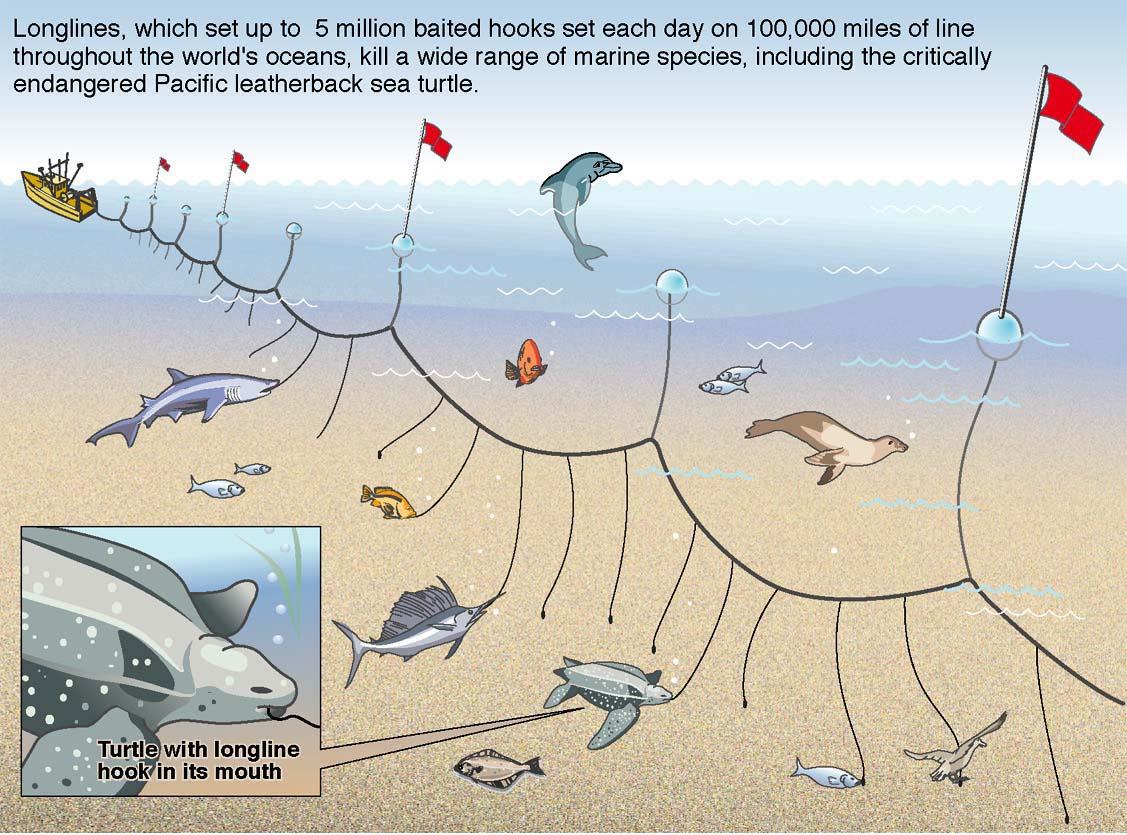 Without careful management, longline fisheries can have unintended interactions with non-target fish, seabirds, and other marine life, as known as by-catch. Hundreds of thousands of non-target species are hooked and killed every year. It is estimated that 300,000 seabirds die on longlines each year. A recent study by Duke University found that 250,000 loggerhead and 60,000 leatherback turtles are estimated to be inadvertently snared each year by commercial longline fishing. Sea turtles that are hooked and released alive often retain hooks in their flippers or digestive systems and this invariably causes severe injury and usually a slow, painful death. Subsequent mortality tends to be higher for hooked turtles than for entangled ones. 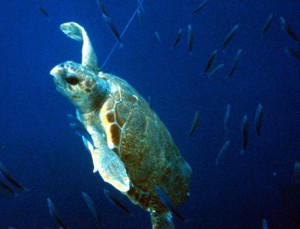 All sea turtles are affected by commercial fisheries. Loggerheads and leatherbacks have the greatest risk because of their feeding habitats.

2) Leatherbacks can also be attracted to chemical light sticks (used to attract fish) on the longlines, perhaps confusing them for jellyfish luminescence, and causing entanglement.

Recent court action has raised awareness about the dangers of longlines. In 2000, the U.S. federal court effectively shut down the swordfish fishery in the central Pacific. However, the longline fishery in the Pacific has expanded so much since the 1980s, that the Pacific leatherback species is expected to go extinct if action is not taken!