During this eleven day program, rising 9th graders – recent high school graduates will develop an appreciation and respect for our oceans that will remain with you for a lifetime. Join teens from all over the world as we immerse ourselves in the care of sea turtles and explore the habitats that support them. You will work alongside the volunteers and interns of the Karen Beasley Sea Turtle Rescue and Rehabilitation Center. From preparing food to cleaning tanks, you will understand the enormous amount of time, effort and love poured into every turtle.

You will earn 25 community service hours through your work at The Karen Beasley Sea Turtle Rescue and Rehabilitation Center, beach sweeps and public outreach. We will research, prepare and present a lesson to the public describing the challenges facing all sea turtles. While walking the beaches looking for nesting mothers, we’ll learn about nocturnal adaptations. We’ll also patrol in the mornings looking for fresh tracks.

Each day we will explore different coastal habitats from maritime forests to salt marshes to the ocean’s edge. By understanding these ecosystems we will better appreciate the plight of the sea turtle. Since the Sea Turtle Stranding and Salvage Network began keeping records in 1986, the number of stranded turtles has more than doubled, illustrating how much work there is to be done. When not preparing food or cleaning tanks, we will discover the wonders of our local coastal habitats from the muddy marsh bottom to the crest of breaking waves.

This camp is designed for rising 9th graders – recent high school graduates who are passionate about sea turtles and the marine environment. Join us on our next adventure as we:

**Please note that all activities are subject to change without notice**

Due to our commitment to personal instruction, we maintain a 4:1 camper to staff ratio and camp sessions will be limited to 24 students. This guarantees that everyone has the best experience possible.

Camp tuition includes: lodging on Topsail Island, all meals from dinner on the first day to breakfast on the last day, 24-hour same-gender adult supervision, admission to all activities, all equipment, transportation including pickup and drop off from the Wilmington International Airport (ILM), Sea Turtle Hospital donation, community service certificate, Sea Turtle Camp T-shirt and memorable group photo. Campers are responsible for round trip airfare to ILM or transportation to Topsail Island and additional money for snacks and souvenirs.

Please note: Campers must provide printed proof of a negative COVID-19 test, regardless of vaccination status, from within 3 days of arrival at camp to be checked-in. Low-risk behaviors are advised after testing and prior to camp.

Coastal North Carolina is surrounded by rich marine ecosystems filled with countless aquatic species. From miles of white sand beaches to fluctuating and dynamic salt marsh habitats, Sea Turtle Camp gives you the opportunity to explore and study these amazing ecosystems. We provide teenagers with the opportunity to learn more about marine biology through hands-on, feet-wet experiential educational. Campers get the extraordinary opportunity to work with live sea turtles as well as participate in some amazing daily activities designed to teach them through experience instead of out of a textbook.

During this amazing adventure you will:

* *  Schedule is subject to change! Please keep in mind that we try out best to adhere to this schedule but we cannot control mother nature! In the event of adverse weather, we have rainy day activities in place. We cannot control canceled vendors. We will try out best to incorporate what was missed in later days, but it does not always fit into our schedule **

Sunday – Campers arrive! Counselors will pick up campers flying in at the ILM airport between 1-2pm and parents driving will check in and drop off from 2-3pm. Let the fun begin! We will conduct a swim test, do fun ice breakers, and end the first day with camp dinner and an opening bonfire. Campers will divide into their teams for the week and meet all their awesome counselors. We will do our first activity learning about sea turtle anatomy and illegal wildlife trade.

Monday – Nest patrol early this morning to check for sea turtle nests or tracks! After that we’ll head to Wrightsville Beach for a SUP lesson and enjoy some SurfBerry, yummm. Next is the behind the scenes tour at the NC Aquarium at Fort Fisher where they’ll get to feed the fish and meet their live-in sea turtle. This is  followed by a range-lead tour on the beach at the Fort Fisher State Recreation Center. Campers will also have the opportunity to see and study NC’s only natural rocky outcrop- the coquina. We’ll head back to Topsail for dinner and family time. Night nest patrol with red flash lights ends the night!

Tuesday –  Campers head to the sea turtle hospital to begin their volunteer work! They will help clean, feed, and bathe the sea turtles earning their community service hours. Working with these species is a once in a lifetime experience. After lunch, campers will head to the New Hanover County Landfill to get a tour of the facility and learn about where our waste ends up and the importance of recycling. The recycling plant is brand new and state of the art. Campers will have a behind the scenes look at how and where things are recycled. Next, they head to a local lake to do water quality testing and learn about Eutrophication. Dinner back at camp is followed by a pier walk and a hands-on marine science activity. Lights out is always at 10pm.

Wednesday – Nest patrol again this morning to look for any new nesting turtles! Campers head down to Wrightsville Beach for a lesson on fouling and species identification out in the field. This is followed by a private surf lesson by our pro’s at WB Surf Camp! After some lunch (and free Surfberry) we’ll head to the salt marsh to learn how to seine and cast net. We will catch and release many different species and learn about the importance of salt marshes. Dinner tonight is followed by family time!

Thursday – More sea turtle hospital time! All morning is spent with the turtles and then campers get to embark on a research vessel with Cape Fear Community College. We will conduct a trawl and learn about species in the Cape Fear River.  Thursday night is Luau night! Plenty of fun games and ukulele playing are in line.

Friday – TGIF! This day is spent with the Bald Head Island Conservancy! We take a ferry over to this beautiful island and get educational tours and talks throughout the day with their professionally trained staff.  On the way back campers will eat out and then head back for a night patrol on the beach.

Saturday – The morning is spent at the sea turtle hospital. Once the doors open to the public at  12, campers will have a chance to teach what they have learned doing public outreach! After a long hard day at the hospital, they will have some beach time and maybe do some boogie boarding! We will follow with marine science activities and dinner.

Sunday – Morning nest patrol again! This is followed by a dissection and looking at specimens under a microscope. After lunch campers will have the opportunity to attend a discover scuba session to try out scuba diving in a pool with our scuba team! Dinner and movie night is to follow.

Monday – We start the morning off right with a lesson about marine debris and conduct a local beach sweep to see what we find in our own backyard. Grab some lunch then off to UNCW! We will see firsthand a professional necropsy conducted by NC Wildlife. Then we will tour UNCW and have a presentation by the Plastic Ocean Project founder Bonnie Monteleone. Dinner back at camp and then marine science games to end the night.

Tuesday – The final day at the sea turtle hospital! Campers say goodbye to their endangered buddies that they have worked so hard with over the last week. We’ll head back to camp to conduct a shark dissection and then put on a camper planned activity until dinner. Everyone says their goodbyes or see-ya laters and starts to pack before lights out at 10pm.

Wednesday – Camp went by too fast! Time to finish up cleaning and have room inspections. Numbers are exchanged and hugs are given. Check out is between 1230-130pm and campers flying out depart between 1-2pm. We hope to see you next year for more marine science endeavors! Maybe you can try scuba diving 🙂

While at camp, students will be staying in the heart of the sea turtle action on Topsail Island. Pronounced Tops’l by the locals, this 26-mile long, quarter-mile wide barrier island has a rich history filled with pirates, fishermen, and surfers. Since Topsail Island is one of the less developed barrier islands in the area, groves of maritime forest still dot the island, and are rumored to hide Blackbeard’s treasure. Nowadays, Topsail is known as a laid-back beach town and a sanctuary for sea turtles.

Campers will be housed in fully furnished retreat center with an ocean view and beach access just a few feet away. This is an ideal location, as we will only be steps from our outdoor classroom. Students will see the sun rise over the ocean during morning nest patrols and the sun set behind the facility shortly before the camp bonfire.

Students will enjoy dining together in our very own dining hall.

The rooms are gender-specific and feature air-conditioning, comfortable common areas, and gender specific bathrooms. Each participant will have his or her own bed. Sea Turtle Camp staff members are housed on-site and will provide 24-hour, same gender adult supervision.

Campers will not only enjoy the breathtaking sunsets from the decks of the Retreat Center, but also private beach access, campfires, and outdoor activities such as volleyball, corn hole, spikeball, basketball, and much more.

As we are only minutes from the Karen Beasley Sea Turtle Rescue and Rehabilitation Center and beach, we can have a more active role in providing care to the turtles at the hospital and assisting the Topsail Beach Nesting Patrol. More hands-on opportunities and nest watching means more fun for the campers!

Do I get to see real live sea turtles?

What kind of community service will I be doing?

Should I bring a friend?

How old are the campers I will be rooming with?

I am a finicky eater. Can you cater to special diets?

What do I need to bring?

What sort of payment do you accept?

What airport is best to fly into for your program, and do you provide a shuttle service?

What if I can’t get in by the set check in time?

What if my luggage doesn’t make it?

Do you have insurance?

How much spending money should I bring?

Does my child need to know how to swim to be able to attend this program? 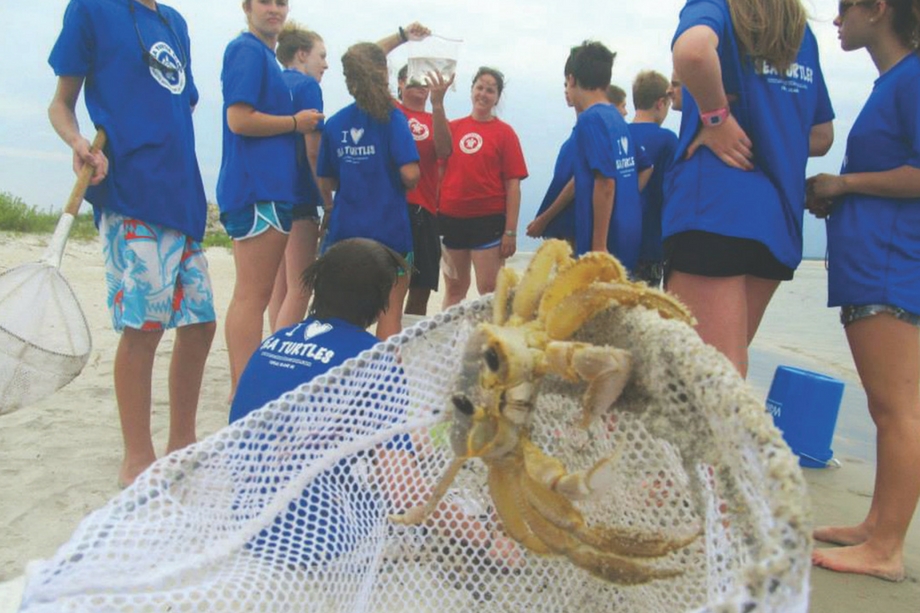 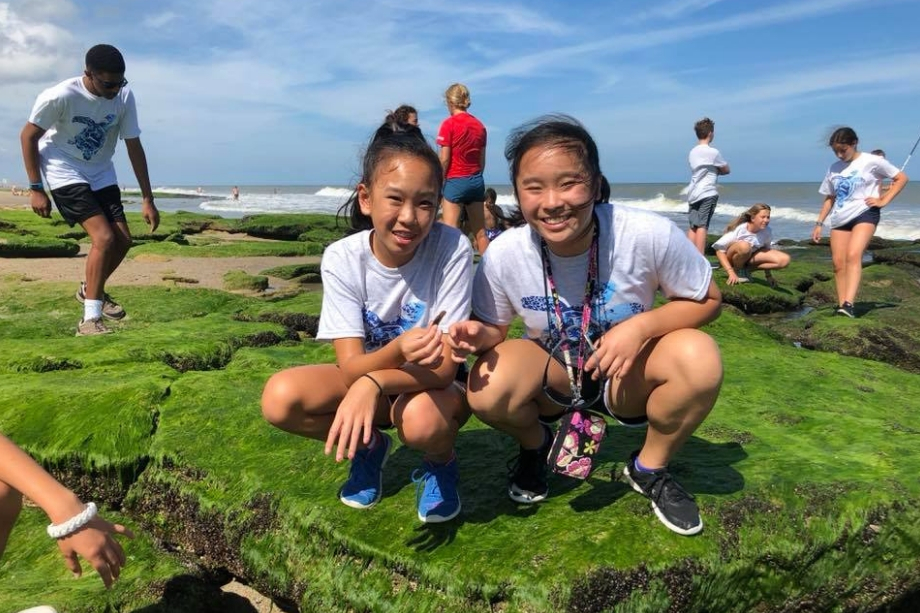 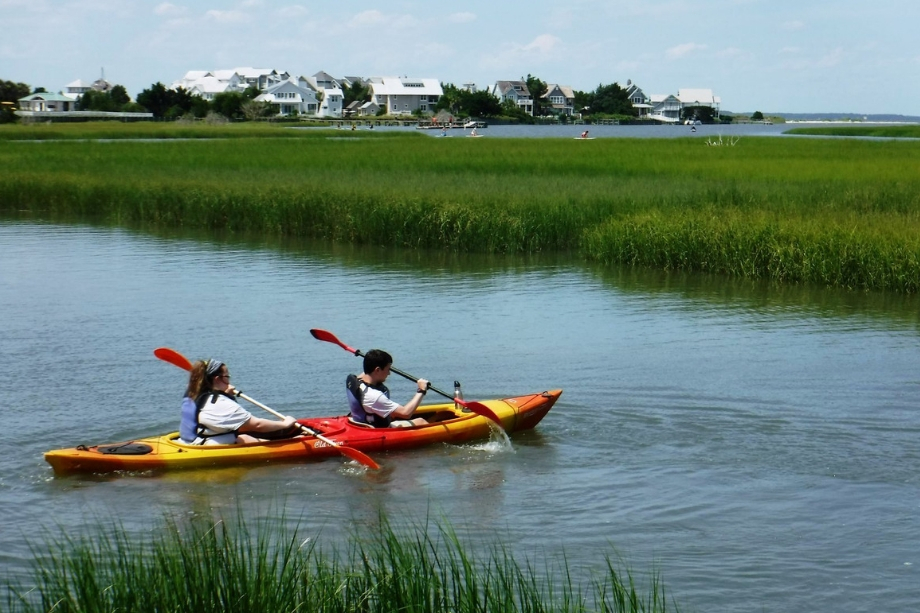 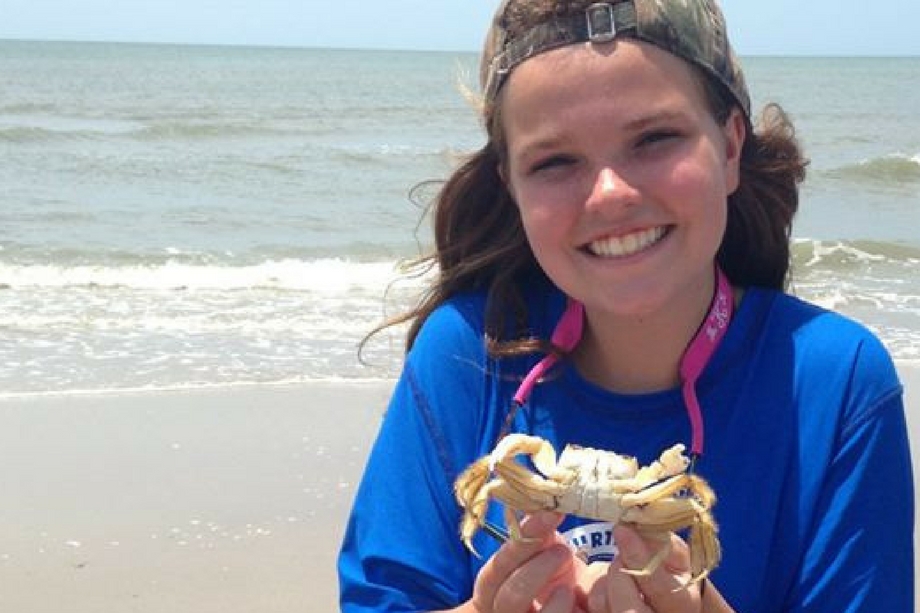 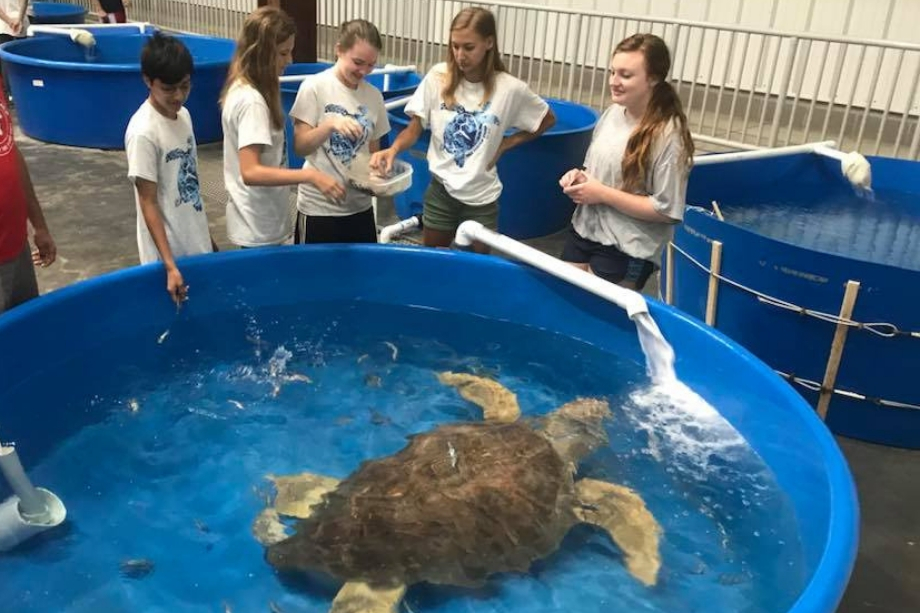 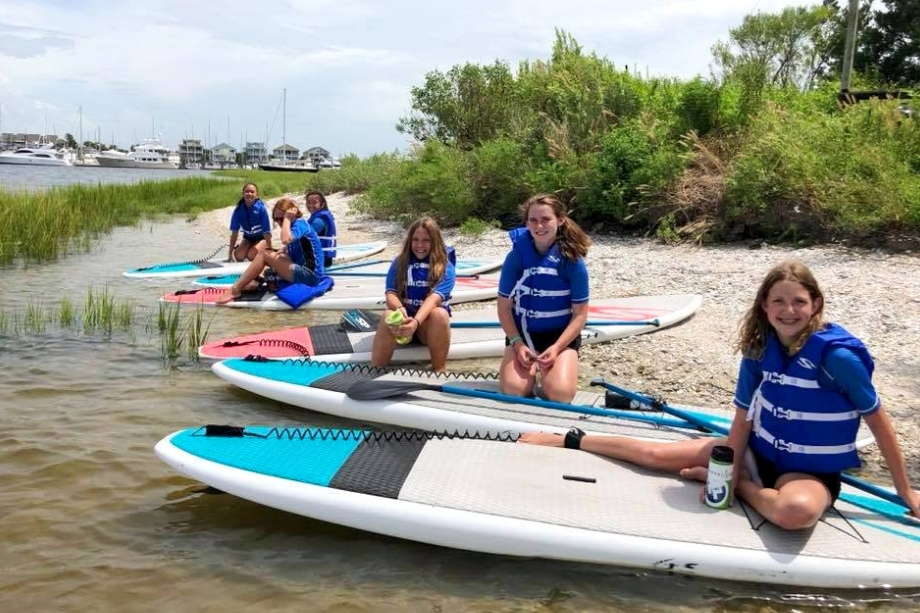 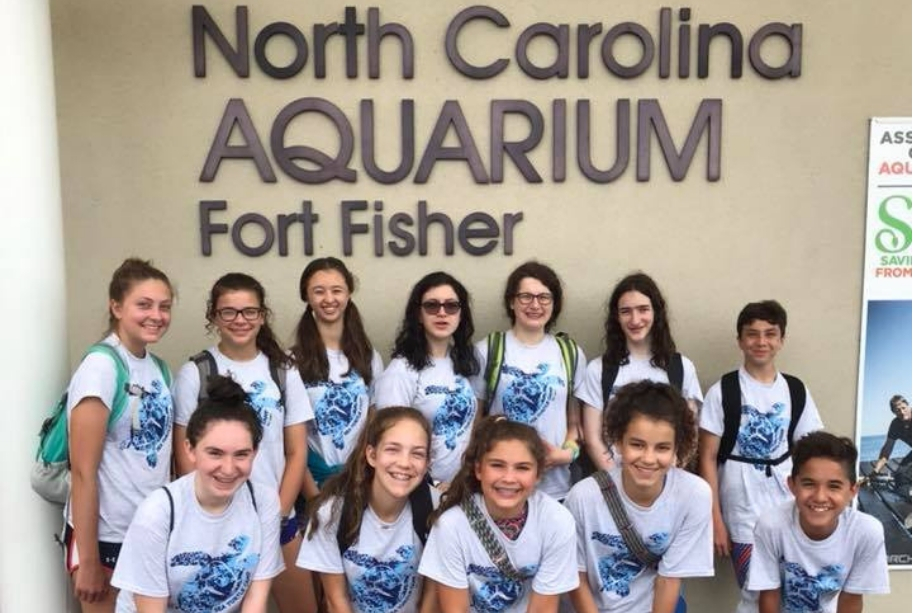 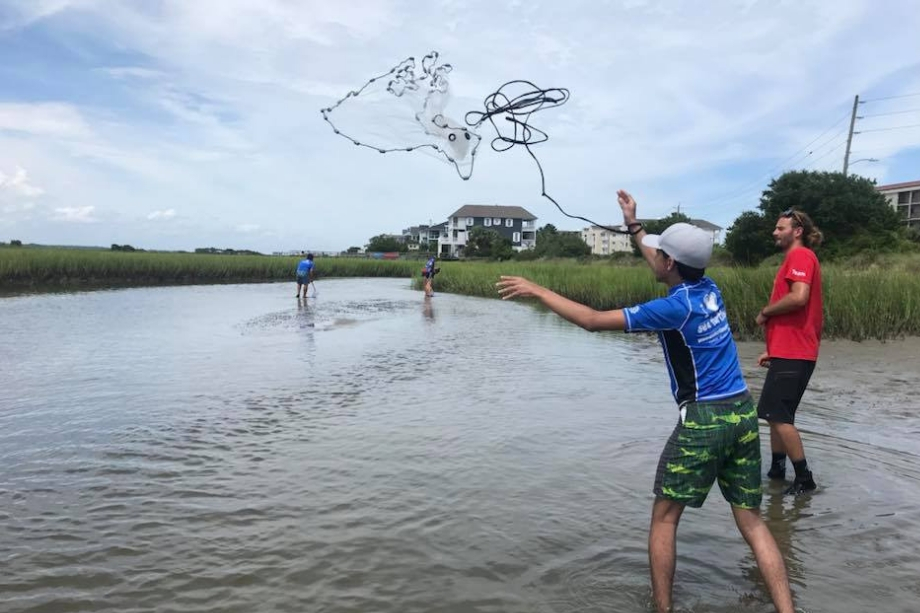 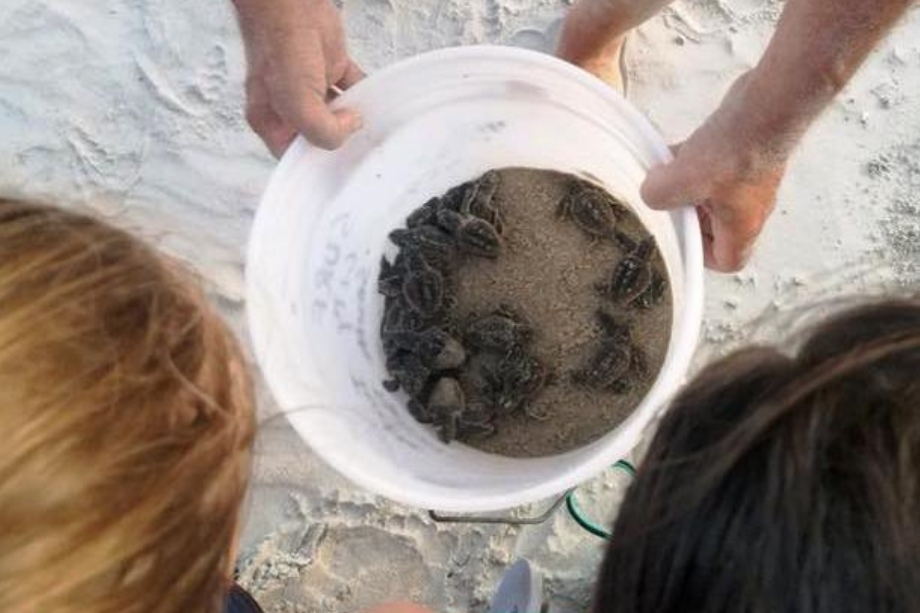 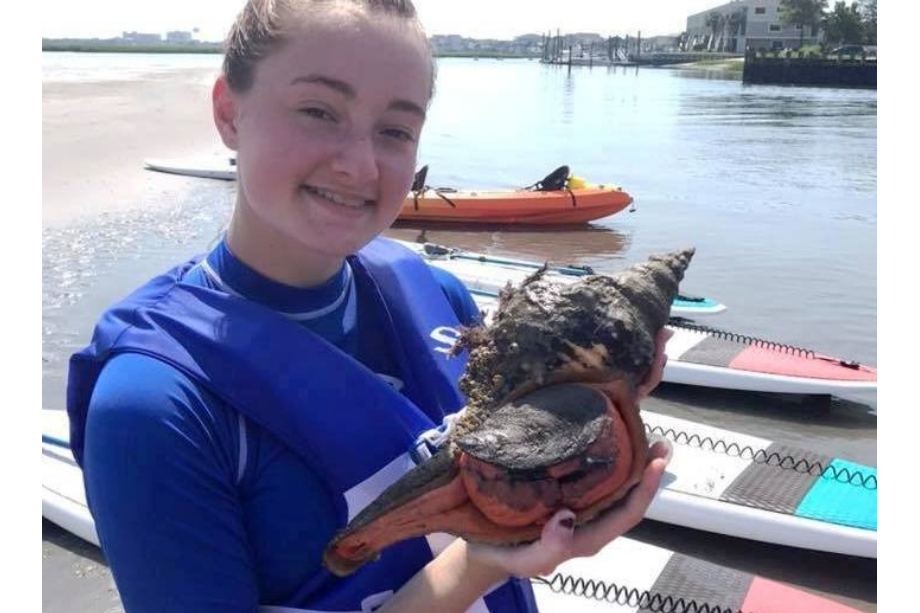