If you live along the southeastern coast of the 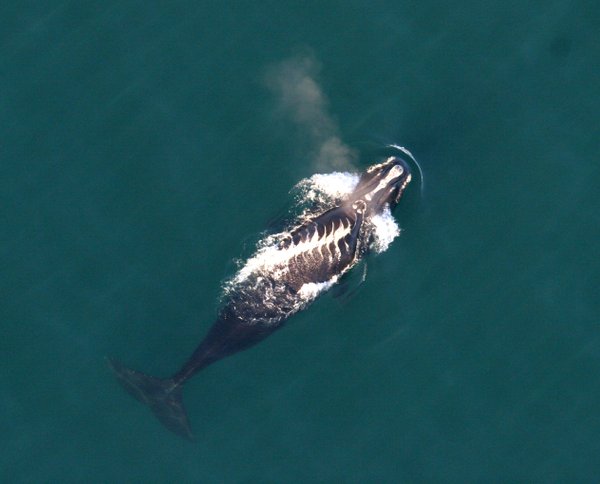 US, be on the lookout for a rare North Atlantic Right Whale. While seeing any right whale is a rare sight due their diminished number, this whale is identifiable by fresh propeller marks stitched across its back from an apparent ship strike. The whale was last spotted 15 miles southeast of St. Helena Sound in South Carolina on January 20.

Right whales are no stranger to the negative impacts of human activity. Their name stems from their being “the right whale” to hunt during whaling season. They were usually found hugging the coastline as they migrated south for calving in the fall/winter and returned to the New England feeding grounds in spring. They were also not exceptionally aggressive or fast swimming. While whaling has diminished in most countries, the right whale population has a new major threat, boat and shipping traffic. Currently, the population of North Atlantic Right whales has been whittled down to about 400 individuals.

Due to the whales’ proximity to coastal cities, it is often in shipping lanes. And due to the high number of ports, the East Coast has one of the highest rates of ship strike in the world. In 2008, a federal rule mandated commercial cargo ships slow down within 23 miles of the coast; shipping companies claim that this rule costs millions of dollars to the industry.

Scientists and researchers are cautiously optimistic about this whale’s future. Most ship strike fatalities occur shortly after impact, and this whale seems to have survived that period. There is some concern that the forming scar tissue could alter the whales’ swimming ability, but more than 50% of the right whale population bears the remnants of boat collisions. Needless to say, we will be keeping an eye out along our coast as the whales move north to feed this spring.