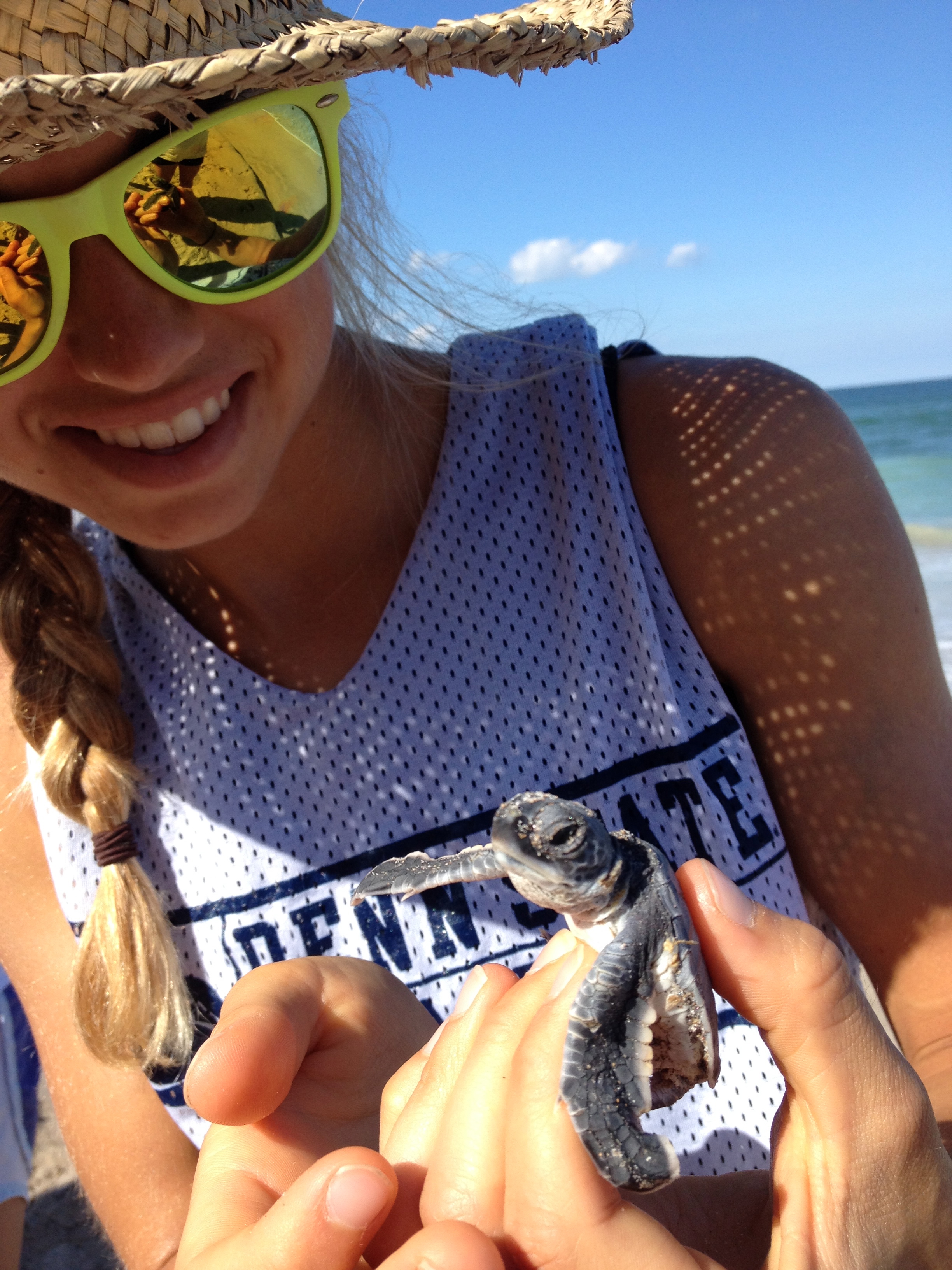 Over fall break I traveled to the Archie Carr National Wildlife Reserve which had a record season in terms of Green turtle nests with 12,846 which is nearly 4xs more nests than last year! The volunteers mentioned that that turtles tend to exhibit a high nesting year followed by a low nesting year as most females do not typically nest 2 years in a row. While I was there, we helped volunteers excavate a hatched loggerhead turtle nest. This particular nest had one live hatchling that had not quite made it to the ocean. After some quick photos, we placed the baby in a dark backpack pocket for safe keeping so that it would conserve its energy until nighttime. Later that night we returned to the beach and released the little loggerhead, watching as it walked towards the brightest horizon and into the ocean. 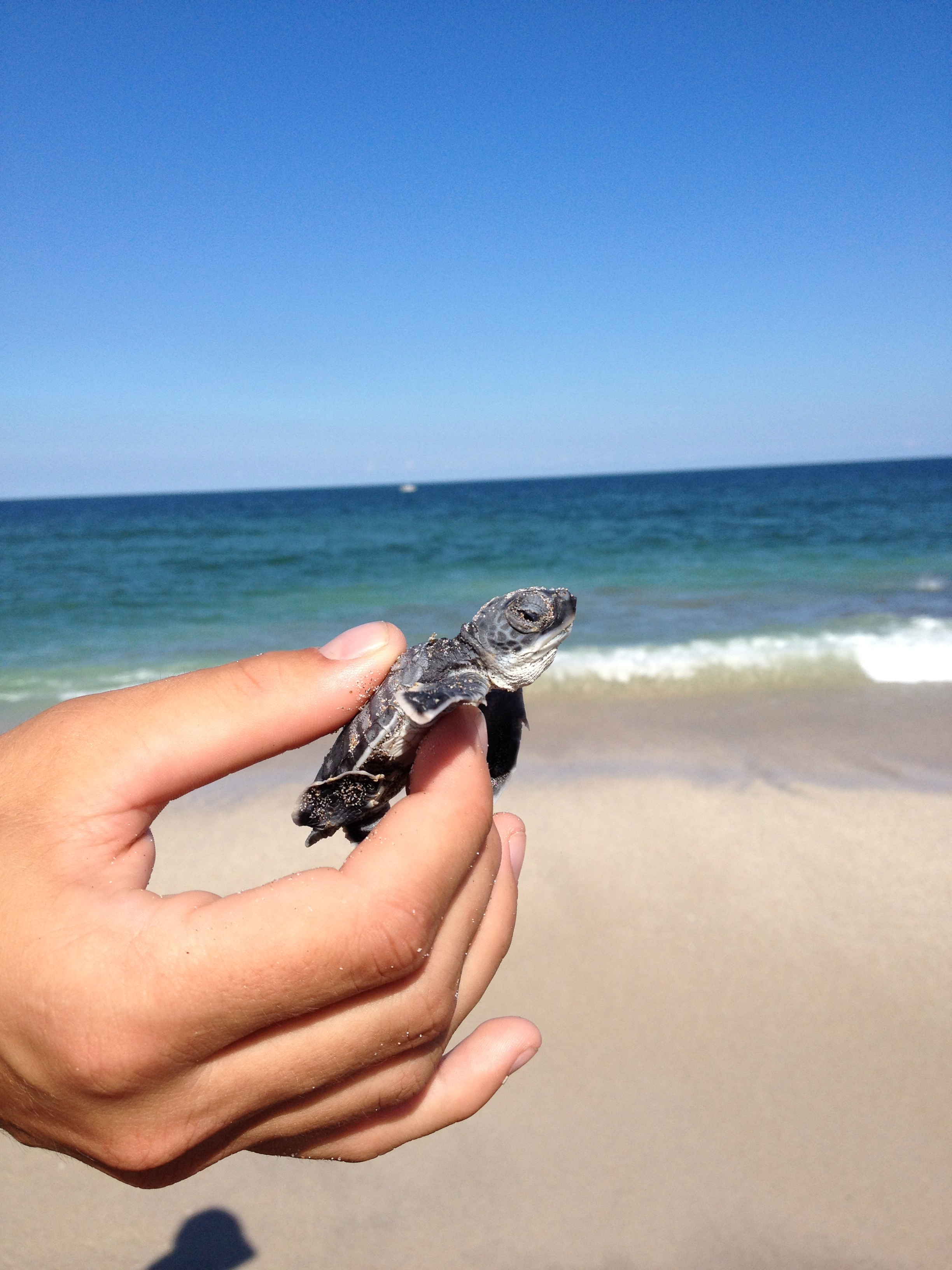 The Archie Carr National Wildlife Reserve is 20.5 miles of beach with strict nighttime regulations against light pollution to protect the roughly 2 million or more baby sea turtles that made their way out of nests, down the beach and into the ocean. Additionally, it was really important that we let our hatchling walk on its own into the water. Scientists think that marine turtles imprint locational characteristics during this walk, which may help mature females return to nest years later. Furthermore rescuing this particular turtle was only possible because of the special training of the Archie Carr volunteers I was working with, I would have never done so on my own for fear of disturbing this imprinting process. It was also interesting to see the alternative methods for nest marking compared to those on Topsail.

On Topsail, turtle nests are typically marked by 4 stakes and bright tape. On the Archie Carr Reserve, nests were marked by two stakes placed upwards towards the dune. Distance between each stake and the nest was measured, running perpendicular to the shoreline, so that volunteers could find the nest later on. One stake was considered the obvious marker. The second stake was placed further away as the hidden marker. In excavating this particular nest, the volunteers counted hatched eggshells and recorded each unhatched egg. Typically, each sea turtle nest will have some unhatched eggs, which failed to develop for one reason or another. In the photo you can see a volunteer displaying a turtle embryo clutching its yolk, which a healthy turtle would digest prior to hatching as fuel for the long journey out to sea. 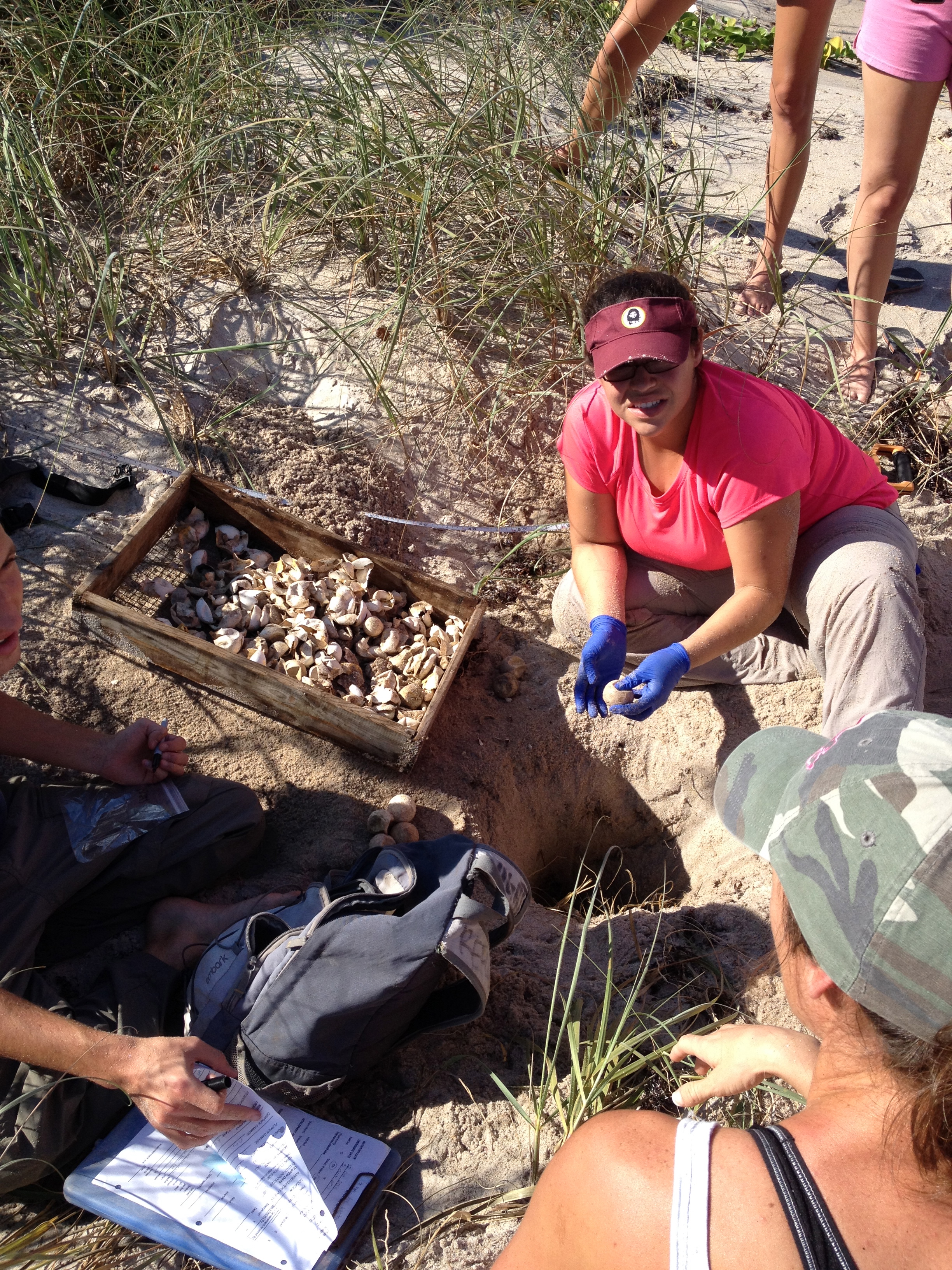 The data we collected on the egg development of this nest will be used in a larger study on turtle development. The second stop on my trip was to Mote Marine Lab in Sarasota, FL. This research facility has been doing investigative studies to determine the hearing range of various species of sea turtles. We watched as they carried out trials in this study. First, a sound operator would play a tone into the water. If the turtle heard the sound tone, it had been trained to touch a plate on its right with its nose. If no sound was heard, then the turtle would touch the plate to its left with its nose. Then, the turtle trainer would record the response. In between each new sound tone, the trainer would have the turtle bite a bar located between the two plates to reorient itself towards the center of the tank. The researchers told us that oftentimes getting the turtle to let go of the bite bar was the most difficult part. These researchers were also highly trained to work with the turtles and to make sure that did not give any indication of which plate the turtle should choose. It was incredible to watch a species, known to have an extremely tiny brain, relative to their enormous mature size exhibit these trained responses. Volunteering or working at Archie Carr National Wildlife Reserve or Mote Marine Lab would both be great options for any Sea Turtle Camp alumni, looking to do more with turtles. And with your Sea Turtle Camp experience, you may have an advantage for these competitive positions.