From Eggs to the Ocean- Part 2 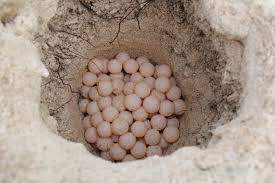 Buried beneath the burning sand, the eggs rest quietly in the dark, and all seem calms. Yet inside each egg a frenzy of activity occurs as the embryos develop. Perfect miniature replicas of their parents take form inside the papery shells. The eggs a sea turtle lays are soft, leathery, and covered with mucus. The thick mucus layer keeps these porous eggs from drying out. Some scientists also think the mucus may have antibacterial properties to offer protection from bacteria in the sand. They are soft and flexible because when laid they must drop into the nest, which is typically more than one foot deep. If they were hard like a chicken egg, they would not survive the drop

Temperature plays an important role in the length of incubation, the sex of the hatchling, and the sex ratio of each clutch of eggs. If temperatures remain above 85 degrees then females with dominate the clutch, whereas temperatures below that will produce mostly males. A fun and easy way to remember this is “the chicks are hot, and the dudes are cool!”

The pivotal temperature is 29°C, at which the nest composition should be half male and half female. However, because of environmental problems such as climate change, more females are being produced. This could potentially be a huge problem for the future if there are no male turtles to mate with the females! 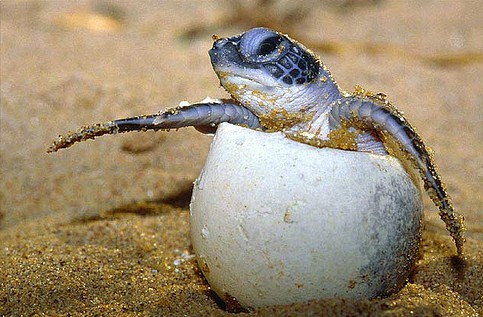