Why Sea Turtles are Important

Sea Turtles are known as a “keystone species”, which means that they are a very important part of the marine ecosystem and influence other animals around them. Healthy oceans need sea turtles and sea turtles need healthy oceans!

1. Without hawksbill sea turtles living and eating on a coral reef, sponges can overgrow and suffocate slow-growing corals causing them to die. As reefs become more and more threatened by climate change and other impacts, the role of the hawksbill on the reef is even more vital! 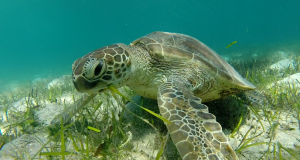 5. Sea turtles play an important cultural role for many coastal communities around the world. Many indigenous cultures consider them ancestors. They are also an important source of income for coastal residents through turtle-watching ecotourism. Research has shown that sea turtle ecotourism can generate three times the income than by selling sea turtle parts (eggs, meat, & shells), making them worth more alive than dead!

6. Aside from their important ecological role, sea turtles are some of the most charismatic animals on the planet! It seems that everyone loves sea turtles. They are a source of awe and inspiration; watching them pull themselves up a beach to nest, swim through a reef, or watching hatchlings charge to the sea are truly magical and unforgettable experiences. Without sea turtles our blue planet wouldn’t be complete. 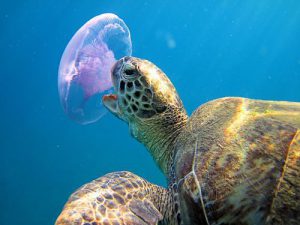 If sea turtles were removed from their habitat by going extinct, their whole marine environment will be disrupted and there would be world-wide impacts. Each sea turtle species uniquely affects the diversity, habitat, and functionality of its environment. Whether by grazing on seagrass, controlling sponge growth, feasting on jellyfish, transporting nutrients, or supporting other marine life, sea turtles play vital roles in maintaining the health of the oceans.