In honor of March being Women’s History Month, we would like to continue to take some time to honor some of the many inspirational women in marine science. 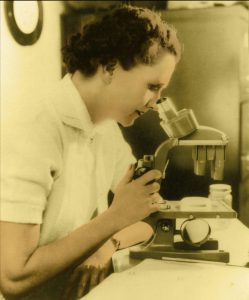 Rachel Carson – “A Poet of the Sea”

Rachel Carson was born in 1907 in Springdale, Pennsylvania where she developed a love of nature from her mother.  By the age of 10, Rachel had become a published writer for a children’s magazine.  She attended the Pennsylvania College for Women, then went on to study at the Woods Hole Marine Biological Laboratory, and received her master’s degree in Zoology from John Hopkins University in 1932. In 1936, Rachel outscored all other applicants on the civil service exam and became the second woman ever hired by the U.S. Bureau of Fisheries. She worked there for fifteen years, initially as a scientist and editor, but rose to become Editor-in-Chief of all publications for the U.S. Fish and Wildlife Service. After writing several popular pamphlets, scientific articles, and books on aquatic life, conservation, and natural resources, she resigned from her government position to devote herself to her writing. 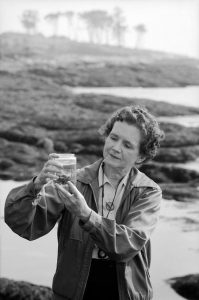 Following World War II, Rachel reluctantly changed her focus in order to warn the public about the long-term effects of misusing pesticides like DDT.  In her most famous work, Silent Spring (1962), She challenged the practices of the government and agricultural scientists to call for a change in the way people viewed the natural world. She felt the need to speak out about the immediate threat to humans and non-humans from chemical exposure, but also to question government assumption that the human domination of nature is the correct plan for the future. Her goal was to remind the public that we are a vulnerable part of the natural world and will be affected by the same damage as the rest of the ecosystem. In 1963 Rachel testified before Congress in order to call for new policies to protect human health and the environment.

In 1964, shortly after the publication of Silent Spring, Rachel lost a long battle with cancer. Her  hard work and dedication had a powerful impact on the environmental movement and eventually led to the establishment of the Environmental Protection Agency in 1970, well after her death.